New Jersey based artist, Bob Matarangelo is this week’s guest blogger for our Artist as Collector Series. 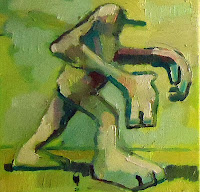 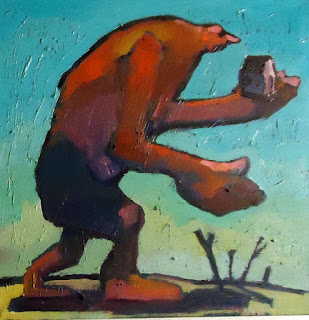 Over the years I have accumulated more than a fair share of artwork from students, friends and collaborators. Some were gifts, others purchased, and still others part of an exchange. Each holds a personal back story, in addition to its aesthetic qualities, so choosing one is never easy.

I have decided to post about an untitled diptych given to me by Ric Haynes from Quincy, Massachusetts. Ric was my best friend in graduate school as we matriculated towards our MFAs at Vermont College, both of us in middle age.

Ric’s process incorporateds a thickly brushed application of oil paint leaving an impasto trail, like the frosting on a Wayne Thiebaud cake.  His characters are benign monsters lumbering through a barren pastel world, while captured in an iconic Robert Crumb gesture. Their draw lies in that tenuous space between comic and horror, like Grimm Brothers Fair Tales. They are loaded with personal references but their secrets are not easily accessed.  These images are the unique product of Ric’s most inner creative being.  In fact, it is Ric we see hanging on the wall, but in a Shamanistic, shape shifting form.

Ric is also a poet, printmaker, watercolorist, and a very accomplished artbook maker, with his work in the permanent collection of the Smithsonian in Washington, D.C.

Bob Matarangelo is an artist working in digital video, animation, painting and sculpture. He is also a teaching artist and has created and collaborated on many public murals in New Jersey.